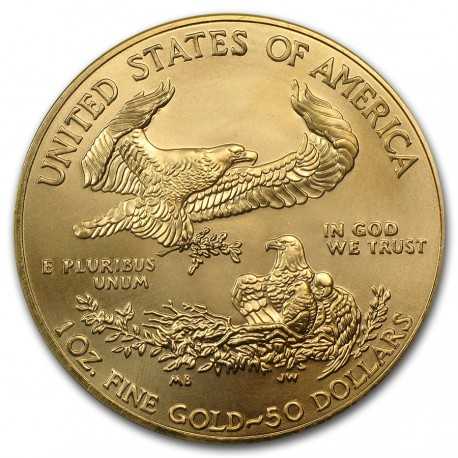 Reference: 1258
In Stock
Social share:
Print
Data sheet
More info
The beauty and power of America, captured in the graceful Striding Liberty design by Augustus Saint Gaudens for the 1907-1933 $20 U.S. Double Eagle gold coin is the basis for the American Gold Eagle coin. The reverse depicts a nest of American eagles signifying the strength and security of American families. These are the only gold coins whose quality and purity are guaranteed by the U.S. government. And by law, only gold mined in The United States is used in the minting of American Gold Eagles. Since its introduction in 1986, its four sizes, 1 oz., ½ oz., ¼ oz. and 1/10 oz., have become the world’s most widely traded gold bullion coins.

Germans are generally economical people. And especially they are economical in all that concerns investments. The most skilled German investors never buy standard currencies of this year. The design of these standardized investment currencies, remains unchanged, every year, and they understand this well. They also know that they are buying gold coins for a long time. And that each currency of the current year costs more than it will be the currency of last year. And they can buy it cheaper. From this, they conclude: that it does not make sense to spend a lot of cash on the market for standardized coins of the current year. It is more economically feasible to buy exactly the same coins of previous years, but cheaper. And with the money saved by this option they can buy another small gold coin or spend that money in a restaurant or shop with the wonderful feeling that they are smarter than many other people who don’t understand the complications of the investment in standard gold coins with the same design.